Medication for Heart Failure (from the Middle Ages to 2010 AD) 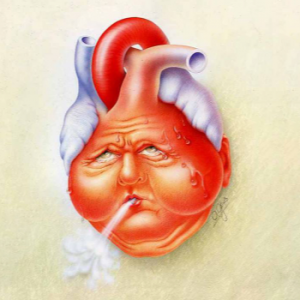 Talking about medication for heart failure is not easy.

There are now so many medicines, some of which can be sold or prescribed under different names. You can check the names on the internet. A more important reason is because the explanation of how a medicine works in the body is very complex. I certainly won’t go too deep into that in this article but I hope to give you some insight.

Let us go back to the past, when we had almost nothing.

From the mediaeval times until the 70’s of the last century we did bloodletting in acute heart failure. When the patient was very breathless, could only sit in an upright position, with big sweating drops on his forehead and you could hear the water bubbling in his lungs, the patient literally drowning in watery lungs, we did bloodletting.

With the bloodletting you diminish the pressure in the blood system and you can hear the bubbling stops, the drops of sweat disappear from the forehead and patients look up to you as the miracle happens. In my early years I did bloodletting too, and it gave me an immense feeling of happiness to see the patient recovering quickly. Unfortunately not for a very long time.

There was also digitalis, discovered in 1775 by the Scottish doctor William Withering, or better to say he got it from a gypsy lady. She gave it to one of his patients. The doctor thought the man would die. The next day he was much better and the doctor succeeded in finding this woman.

Digoxin (digitoxin, digitaline, digitalis) are extractions of the foxglove purpurea plant. Nota Bene, it is a common garden plant! Digoxin slows down the electrical pulse going from the atria to the ventricles and increases the power of the heart’s contractions but it is a poison. Just 2 grams of the leaves of the plant can kill you. It was one of the favorite poisons of Agatha Christie.

It is difficult to maintain the correct level of digoxin in the blood and it can easily proceed to toxic levels. In the 70’s and 80’s it was the most often diagnosed medicine intoxication in hospitals. For heart failure we don’t use it much anymore, unless the patient has atrial fibrillation with a fast heart rate, but sometimes it is still given as a last resort when the patient is very bad and all other medicines don’t give relief.

In the early 60’s furosemide (Lasix®) was discovered in Germany. This is a potent diuretic that blocks the kidney from reabsorbing water and so more is released from the body. We still can not manage acute heart failure without furosemide. It diminishes the pressure in the blood system, like with bloodletting.

So when furosemide replaced the bloodletting, my observation of the patient changed. Before the bubbling stopped and before the sweat drops on the forehead disappeared I could now observe the first drops of urine in the catheter bag. It gave me the same joyous feeling, knowing that the situation would improve dramatically in minutes.

In 1981 the first ACE inhibitor (captopril) was introduced. Explanation is difficult: there is a system of enzymes in the body that control fluid volume and blood pressure, the RAAS system (more about it in my next article). ACE inhibitors block one of these enzyme reactions, with the result that the blood pressure goes down and more fluid is released as urine.

Why are they good for the failing heart? Look at it this way: imagine a river taking water to the sea. There is only one narrow branch of the river so there is a lot of energy used in the wild swirling of the water as it goes to the sea. When there is a big wide delta, the water can flow easy and steadily to the sea. No energy spoiling. That is what ACE does. Not only does it reduce the total amount of fluid in the body but it opens all the small arteries to the organs. The blood flows more easily and the heart can maintain the blood flow to the body with ease.

Since 1995 a class of drugs called ARB’s have been available. These block an enzyme reaction at another level in the same cascade. The effect on the heart is about equal as for the ACE inhibitors but the ACE inhibitors can give coughing problems and sometimes a loss of kidney function. It’s good we can replace ACE by ARB’s.  ARB’s can be combined with newer medications – see my third article, to come.

Aldactone (also called spironolactone) is a diuretic that raises the potassium level and was originally given together with furosemide to reverse the potassium losing effect of furosemide. In 1998, it was shown that Aldactone reduces cardiac death and cardiovascular accidents so much that a big study was stopped due to the tremendous positive effects because the organizing committee didn’t want to withhold Aldactone from the control group. Aldactone also works on the action of a kidney hormone called aldosterone to control the volume of blood in the body. (Aldosterone is the second A in the RAAS system that I mentioned earlier)

Beta-blockers, as I discussed in the first article of this series, slow the heart down and also lower the blood pressure. Most cardiovascular patients are familiar with those drugs so I won’t discuss them further in this article.

This was the situation when I retired in 2010. In the next article I will tell you what happened after that until now, and in my 4th I will try to inform you about the mechanical solutions that are available now.

To start a patient on a heart failure drug combination is not easy. It’s necessary to start in low doses in the right order and to check and adjust the dose of the medicine slowly with checks of the blood in between til the maximum tolerated level is reached. The general practitioner doctors of Be Well are fully capable of adjusting your medicines.

Last but not least I give you some easy tricks to remember what type of heart failure medicines you use.

If you have questions or remarks, don’t hesitate to contact Be Well. Put your question or problem by email or by phone and we will answer as soon as possible. Remember: questions are never stupid, but answers can be sometimes.

Ben van Zoelen, retired Cardiologist, member of the advisory board.