Dengue Fever is a common and at times severe virus infection transmitted by mosquitoes. There were 98,000 cases of dengue in Thailand in 2019, along with 100 deaths, and yet 3 out of every 4 infections are thought to give no symptoms at all. 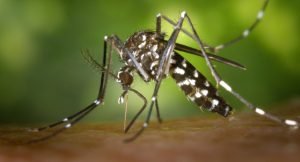 Like most viral illnesses there is no cure and hospital treatment for severe cases consists of supportive care, maintaining vital systems so that the patient has chance to fight off the infection themselves.

The symptoms of dengue begin a few days after a mosquito bite. Typically, there’s a sudden fever, pain behind the eyes, headache and severe body aches (so bad that in earlier times dengue was known as ‘break bone fever’). In extreme cases there may be bleeding from the eyes, nose and mouth, explaining dengue’s Thai name of ‘khai leuat ork’ (fever blood out).

The Aedes mosquito that transmits dengue has white stripes and is easy to recognise but not so easy to avoid. This mosquito bites in the daytime as well as at night and can transmit other similar viruses like Zika, chikungunya and yellow fever virus.

There are 4 distinct strains of dengue virus and the interaction between them and the human immune defence system is key to why vaccination can be dangerous.

Infection with a dengue virus results in long-term immunity to that strain. For a year or two there is cross-over immunity to the other strains also, but this protection is lost as the antibody levels fall, making it possible to catch dengue again. The strains can be caught in any order, with the second infection usually much worse than the first, third or fourth (whichever strain causes it).

This happens because antibody levels from the first infection pass through a ‘danger zone’ as they fall from high to low levels over time. If the second virus comes along when antibodies are in the danger zone then the immune response goes into overdrive, generating an excessive, harmful and sometimes fatal reaction. Levels above or below the danger zone are safe.

This is why we don’t recommend the dengue vaccine – if you’ve never had a dengue infection and you take the vaccine then you will make a high level of antibodies, the same as happens with a first dengue infection. As those antibody levels fall you will for a while be at a much higher risk for severe and possibly fatal dengue than if you’d never been vaccinated at all.

Checking for antibodies before giving the vaccine would avoid this problem but the antibody test for dengue is not reliable and there are false positive results from antibodies to similar viruses (chikungunya, yellow fever and Zika).

In the absence of a safe vaccination program, the best way to protect yourself against dengue is to eliminate mosquito breeding sites around the home, ie remove or drain anything that may collect small pools of water during the rainy season. We also recommend wearing long sleeves, long trousers and to use insect repellant, even during the daytime in the rainy season.

An interesting approach to lessen community exposure to the dengue virus has recently shown great promise. It’s a form of biological control whereby Aedes mosquitos are deliberately infected with a bacterium (called Wolbachia) and then released into the wild.

This bacterium not only does no harm to the mosquito but actually infers a survival advantage to her compared to other, non-infected mosquitos. The second part of this ‘two-card trick’ is that the Wolbachia bacterium is passed into the mosquito’s eggs and so all future generations of mosquitos will carry the bacterium also.

Success of this strategy has been recently reported in Indonesia – where releasing infected mosquitos resulted in a 77% fall in dengue cases – and previously in North Queensland, Australia, where dengue fever was eliminated.

It’s always possible that the dengue virus or the mosquitos themselves will one day mutate to negate the effect of Wolbachia but, at least for the time being, this approach appears to be an effective way of suppressing the risk of dengue infection. We’re not currently aware of any plan to implement this approach in Thailand, however.